“I Love Lucy” Live is a Modern Day Classic

Lucy, you’ve got some xplaining to do!

“I Love Lucy” Live on Stage returned to the Broadway Playhouse in Chicago,IL on December 29th to bring heartwarming charm back to the city. I attended the show on Thursday, January 10th.

The evening started with the Crystal Plumbs (Tones) singers ushering in the show with their live commercial. This small group of men and women would randomly return throughout the play to bring 1950s commercials to life and give the actors a chance for quick changes. One lively male host kept everyone on their toes with his friendly interaction with the audience. His interaction included a special giveaway around midway through the play.

The stars of the show, Lucy Ricardo (Sirena Irwin) and Ricky Ricardo (Bill Mendieta) delighted audiences with their impressive recreation of the episodes “The Benefit” (Season 1/Jan. 1952) and “Lucy Has Her Eyes Examined” (Season 3/ Dec.1953). Ethel and Fred Mertz (Joanna Daniels and Curtis Pettyjohn) went along for the ride in their uncanny similarity to the original talents. 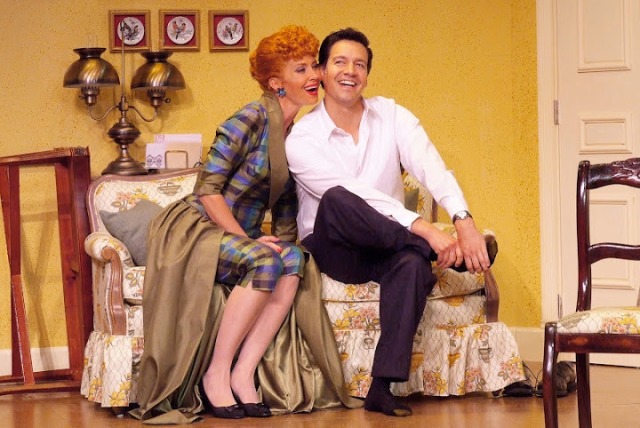 The 100 minute show was hilarious from beginning to the end. Lucy sang off key for “The Benefit” and had to do a comedy skit with Ricky for Ethel’s Club Benefit show.  She turned their segment upside down (as only Lucy can) with a comedic twist.

In “Lucy Has Her Eyes Examined”, the jitterbug is all the rage. Ricky and Lucy get their eyes checked, but only Lucy gets the medical treatment to ruin her audition. The fun continues to the very end of this modern day classic.

“I Love Lucy” Live on Stage is clean rated G fun that is for the entire family. Adults will love to reminiscence about their favorite sitcom from yesteryear, while children will be excited to what’s next. There is enough music in the play to classify it as a musical, yet enough dialogue that doesn’t let the music get mundane.

My biggest complaints about “I Love Lucy” Live are it is too short and they should have brought my favorite European episodes from season 5 to the stage.

You can catch “I Love Lucy” Live on Stage every Wednesday through Friday and on Weekends through March 31st, 2013. It is currently playing at the Broadway Playhouse at Water Tower Place in Chicago,IL.

BTSCelebs sends a special thanks to Director Rick Sparks, Producer Hyra George and Amanda Meyer for letting me review the production.

This entry was posted in Broadway, Entertainment, Events, I Love Lucy and tagged Bill Mendieta, I Love Lucy, Sirena Irwin. Bookmark the permalink.