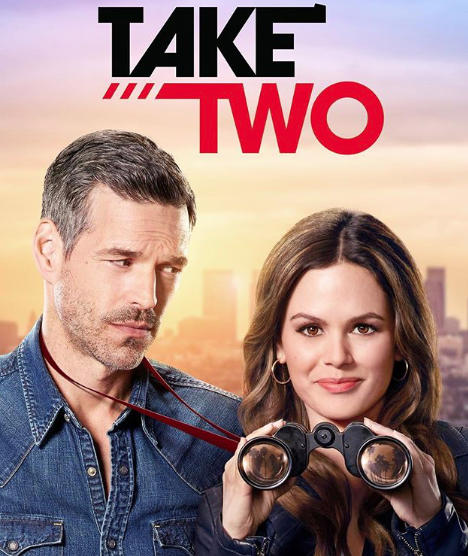 The upbeat detective show is all about an actress from a defunct crime series joining forces with a real detective. She originally sticks by him to learn the ropes but ends up helping him solve cases and boosts his agency. My first impression of the show is “Criminal Minds” meets “Gilmore Girls”. The detective’s life is reminiscent of the most popular crime shows, while the famous actress’ fast talk and quirky humor brings back GG memories. “Take Two” is very fast paced with a touch of the action genre. Fans of Hollywood’s crime, action and romance productions will find this show intriguing.

In episode one, detective Eddie Valetik (Cibrian) meets actress Sam Swift (Bilson) for the first time, and she tags along on his missing persons case. Even though her presence seems like a nuisance in the beginning, she holds the key to solving a related murder and catching a gang boss.

In episode two, the detective pair accidentally witness a murder during a Cheaters investigation. A woman is dead and her married lover is suspected to be her killer. Appearances are very deceiving because the woman turned out to be the master of disguise who indirectly got involved with a dangerous cartel. On a side note, we also get introduced to Sam’s new assistant Monica, who is a self-professed cyborg. Monica (played by actress Alice Lee) has biohacking implants in both of her hands.

*A Special Thanks to The Lippin Group and ABC/Disney for the screeners.*

Hi, my name is Kristy. I'm a longtime freelance editor/writer and self-published author. Thank you for stopping by my blog. :)
View all posts by BTSCelebs →
This entry was posted in Entertainment, Reviews, TV and tagged ABC, Disney, Eddie Cibrian, Rachel Bilson, Take Two. Bookmark the permalink.