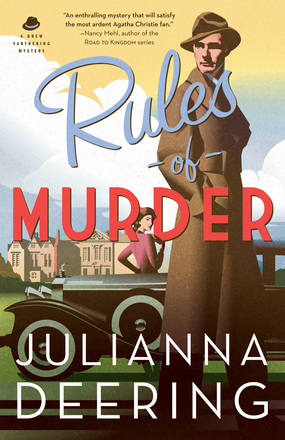 What’s in a name? Everything!

Under the pen name Deering, author DeAnna Julie Dodson takes readers into the mind of a serial killer. “Rules Of Murder” is not what it appears to be. The book’s preview describes one murder occurring in Farthering Place, but two murders actually happen at the same time.

The wealthy and wayward Drew Farthering is on a mission to find the killer and he invites his best buddy Nick and new lady love Madeline for the ride.

In the end, the murderer has killed over five people on his spree. Drew is in a race against time to find the psycho before he is next.

BTSCelebs only recommends “Rules Of Murder” to those with stomachs of steel. The details of the murders are plentiful and gruesome.

Check out the book’s original preview below:

From The Tip of his black Homburg to the crease in his stylish cheviot trousers, he’s the epitome of a stylish 1930s English gentleman. His only problem? The body he just discovered.

Drew Farthering loves a good mystery, although he generally expects to find it in the pages of a novel, not on the grounds of his country estate.

With the help of beautiful and whip-smart Madeline Parker, a guest from America, Drew proposes to use the lessons he’s learned reading his mysteries to solve the crime. Before long, he realizes this is no lark, and no one at Farthering Place is who he or she appears to be–not the butler nor blackmailer, the chauffeur nor embezzler. Trying hard to remain one step ahead of the killer–and trying harder to impress Madeline–Drew must decide how far to take this dangerous game.

*BTSCelebs thanks Bethany House for the complimentary copy of the book.*

Hi, my name is Kristy. I'm a longtime freelance editor/writer and self-published author. Follow me on Twitter @ShellyM86
View all posts by BTSCelebs →
This entry was posted in Books, Entertainment, Reviews and tagged DeAnna Julie Dodson, Julianna Deering, Rules of Murder. Bookmark the permalink.