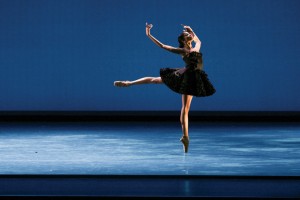 There is only one word to describe Joffrey Ballet‘s 2015 Winning Works…. Compelling.

Mr. Latif’s A Year From Now Ago told a heartbreaking story and brought out so much emotion in a short amount of time. During his dance inspired and dedicated to Mothers, I wanted to know if the mother was giving birth or having surgery. He made use of the large screen and gave his performance a movie intro. The dancers executed each move and emotion perfectly. A Year From Now Ago was an emotional roller coaster ride that was so worth it.

Mr. Kremnev’s Windy Sand was very uplifting. His dance was carefree and took you to the beach. The dancers seem to imitate the movement of the waves, the wind, and they even tried to evoke the feelings people feel watching a beautiful sunset on a warm summer day.

Choreographers Jennifer Archibald and Stephanie Martinez dances were well arranged, but they didn’t tell stories that were as intricately designed as Mr. Latif and Mr. Kremnev. The high energy  and emotions were present, however, I wasn’t as moved by their performances.

The audience was challenged by all four of these complex dances. Each one of them can be considered exquisite pieces of art fit for the Museum of Contemporary Art.

After the show, I even had the opportunity to meet Mr. Latif and compliment him on a job well done. He was very kind and gracious.

*A special thanks to The Silverman Group and The Joffrey Ballet for giving BTSCelebs the opportunity to review Winning Works.*

Hi, my name is Kristy. I'm a longtime freelance editor/writer and self-published author. Thank you for stopping by my blog. :)
View all posts by BTSCelebs →
This entry was posted in Dance, Entertainment, News, theatre and tagged Abdul Latif, Alexei Kremnev, The Joffrey Ballet, Winning Works 2015. Bookmark the permalink.