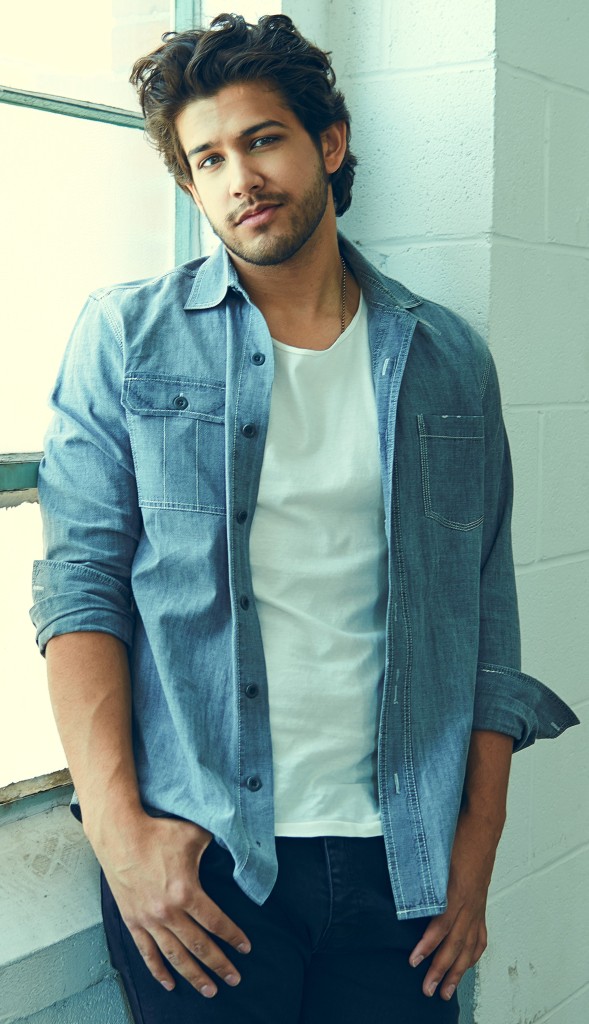 Talented singer Spencer Lloyd got his first celeb fangirl when Jennifer Lopez gushed about him on Season 13 of “American Idol”. Since then, he has continued to grow his fanbase with the purpose of drawing people closer to God.

Spencer made his official debut in the Contemporary Christian Music industry this summer with Maxx Recordings’ first male trio 3for3.  BTSCelebs was recently given the opportunity to interview this rising star to learn more about his days on IDOL, formation of 3for3 and some interesting behind-the-scenes info about his first few months of stardom.

BTSCelebs: Who is Spencer Lloyd?

Spencer Lloyd: I would say he is a young guy still trying to become the man he is supposed to be. Everyone’s got a destiny, and he’s still got a ways to go to fulfill his. Oh, and he likes music just a little bit.

Why did you audition for season 13 of American Idol?

I originally didn’t have the intention of auditioning for the show because I had no confidence or belief that I would be able to advance farther or possibly even at all. Some of my friends kept reminding me that it was coming through our hometown of Little Rock, AR. A week and a half before the auditions, I signed up and started preparing. I had absolutely no clue what I had just signed myself up for.

Were you starstruck by the panel of judges?

I think starstruck is a bit of an understatement for what I was feeling when I was in that dark room only lit up by the lights on their faces and mine. I never thought I would get nervous because of that, but boy was I wrong.

What did you take away from your brief time on IDOL?

Well, my time on IDOL definitely gave me a new perspective of the music industry. Although most people saw it as a brief time, I assure you it was many months more than they know. The process allowed me to really grow more than I ever had before. Being in a pressure cooker with some of the most amazing artists you have ever met definitely brings the pressure to continue to learn and push yourself. The biggest thing I brought away was lasting friendships with some of the coolest people I know.

How did you become a part of 3for3?

My good friend, Mitchell Solarek, actually introduced me to the two other guys. It was like an “OMG” moment the first time I jammed with them. We just meshed together and made this incredibly interesting blend of R&B, Hip Hop, and Indie songwriter.

This year, 3for3 went on their first tour with Crowder, Lauren Daigle, Finding Favour and NF. What were the highs and lows of tour life?

I honestly can’t think of many, if any, lows from the ‘Air1 Positive Hits Tour’. It was an incredible experience for all of us. Being able to make your first tour on a tour bus, singing alongside some of the most renowned Christian artists and being in front of good sized crowd all made for a great tour. If I could try to come up with some sort of low for the tour, it would be when there was some sort of problem with the toilet on the bus, and it caused this horrific smell that can only be described as death. It led to much laughter just from the discomfort of everyone holding their noses tighter than ever. So, I guess you could say every fresh thing has a small stink to it, but that could never take away from the fun or joy of all of us.

I have dreamed of going to the Dove Awards since plus ONE was a band in the early 2000s. I heard your band attended this year. What was it like?

The ‘Dove Awards‘ can really be described in a couple words: Planned Christian Craziness. It’s honestly just a whirlwind of things happening. For me, meeting all the artists that I had listened to and grown up listening to was just incredible. Being able to form relationships with other artists was also a blessing that came from this. It’s just amazing the amount of amazing people in one place.

Please share one unforgettable behind-the-scenes moment from this year’s show.

Finally meeting Mattie Montgomery, who is the lead vocalist for one of my favorite rock groups ‘For Today’, was definitely my highlight. He is an incredible man of God that I look up to in every way. He has helped me and encouraged me with his words and his message. To finally be able to meet him and talk with him was amazing. Now, I’m able to call him my friend and brother.

What upcoming projects can your fans expect from you in 2016?

There are many things that they will have to look forward to! What I’m thinking are some collaborations, some cool videos, and a full length album! I think we really want to put our effort into making the fans the focus. Giving them what they want and deserve. They are the only reason any of this is possible, and I think we owe it to them to give our all.

BTSCelebs grew up listening to CCM powerhouses of the early 2000s like Natalie Grant, plus ONE, Stacie Orrico and Joy Williams…so, I’m intrigued to see what he has to offer this beloved genre of music.

To learn more about Spencer Lloyd and his group 3for3 visit their official website: 3for3music.com.

*BTSCelebs sends a special thanks to Wortman Works, Maxx Recordings and Spencer Lloyd for the interview and images.*