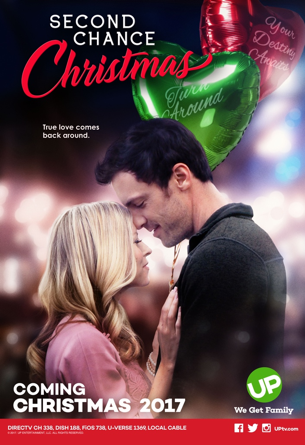 If you believe in the concept of soulmates, you’ll adore “Second Chance Christmas”.

Tomorrow night, UP tv premieres their first Christmas film of the holiday season. Tilky Jones and Katrina Begin star as couple in trouble, Jack and Caroline, whose love is put to the test due to shocking amnesia.

In the movie, the pair is just like any other American couple. It was love at first sight at a party, they get engaged a year later, and the chemistry dies out after a few years of mundane marriage. Lack of communication is the root of their problem, but they don’t figure it out until Caroline gets in an accident on her way to file divorce papers. Amnesia is the best thing that could happen to her, because it helps her mend broken relationships with everyone in her life (friends, family, co-worker, even the dog).

“Second Chance Christmas” is about loving and connecting with people despite a busy work schedule. It’s the kind of a well-rounded film UP tv is famous for.

I enjoyed the story and thought everyone fit their roles perfectly. The only drawback is that the pair is not a couple in real life. Their mistletoe inspired PDA makes you a little disappointed that it’s only acting.

*A Special Thanks to UP tv for the image and movie screener.*

Hi, my name is Kristy. I'm a longtime freelance editor/writer and self-published author. Thank you for stopping by my blog. :)
View all posts by BTSCelebs →
This entry was posted in Entertainment, Movies, Reviews and tagged Katrina Begin, Love Strikes Twice, Second Chance Christmas, Tilky Jones. Bookmark the permalink.